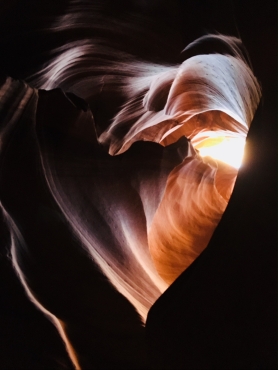 Blessed be the God and Father of our Lord Jesus Christ, the Father of mercies and the God of all consolation, who consoles us in all our affliction, so that we may be able to console those who are in any affliction with the consolation with which we ourselves are consoled by God.(2 Corinthians 1:3-4)

Consolation is a wonderful word that appears in the writings of early Christian authors.  Ignatius of Loyola defined consolation as a deep feeling of love for God, which includes “any increase of faith, hope, and love and any interior joy that calls and attracts [a person] to heavenly things.” (The Spiritual Exercises)  Unfortunately, the word has all but disappeared in modern devotional works. In secular usage, it has even developed a slightly negative connotation of something that is of secondary importance, such as a consolation prize or a consolation game.  Still, it retains a favorable meaning of “a person or thing providing comfort to a person who has suffered.” (Webster’s)  This is pretty close in meaning to the ancient Greek word paraklēsis, which can be translated as either “comfort” or “consolation.”  Most modern versions of the Bible translate paraklēsis as comfort, although some like the NRSV use consolation.  “Blessed be the God and Father of our Lord Jesus Christ, the Father of mercies and the God of all consolation, who consoles us in all our affliction, so that we may be able to console those who are in any affliction with the consolation with which we ourselves are consoled by God.” (2 Corinthians 1:3-4)

I have encountered this consolation from God.

Five years ago in October, 2013 I underwent open-heart surgery to replace my aortic valve and ascending aorta.  I had known this day was coming since May, 2005 when the defective valve and aneurism were first discovered – an event that occurred quite by chance.  One evening some months earlier I experienced a sudden onset of chest pain and Pat drove me to the emergency room to have it checked out.  A few hours later it was determined to be a simple case of heartburn.  Nonetheless, it was thought that I should have it looked into further, “just to be sure there is no problem.”  And so, a series of appointments ensued and after several rounds of testing, a leaky valve and aneurism were uncovered.  This turned out to be a good thing because aneurisms have a nasty habit of “dissecting” spontaneously (doctor talk for bursting without warning – not good).  While I was grateful to know, still, it came as quite a shock when the doctor delivered the news.  The full scope of the problem was not immediately clear to me, but I knew that life would be different from that day forward.

There is a wonderful verse in Romans where Paul says, “And we know that in all things God works for the good of those who love him, who have been called according to his purpose.”  (Romans 8:28)  In 2005, it was very hard for me to see how God could work any of this for good. Best case it seemed to me was that someday I would go through a horribly invasive operation in which my heart would be stopped and bypass pump turned off while a replacement valve and polyester aorta were sewn into place.  Worst case was, well, something I did not want to contemplate.  In the meantime, as the initial shock wore off and summer turned to fall, I became worried and fearful, and fell into a terrible funk – not clinical depression, but a time of significant emotional distress.  It would be an overstatement to call it a dark night of the soul – it was more like a soupy fog in which I felt terribly scared and alone.  The diagnosis dispelled my belief that I was in the peak of condition, and it crushed lingering feelings of invulnerability from my youth.  I had run three marathons, cross-trained for years before it was popular to do so, and had not missed a day of exercise in thirteen years.  My heart was the last thing I thought would ever cause me a problem.  But I was wrong.  And now I was struggling with anxiety and fear.   I was uncertain of where to turn for help.  It was then that the Lord provided the first of two consolations.

On the way to work one morning as I was passing a Lutheran church, I noticed a sign announcing a special healing service.   As far as I know, this was a one-off service at that church because I never saw it offered before or since.  The timing of it was truly an act of divine grace, and I knew instantly that I needed to attend.  And so on the appointed evening, Pat and I made our way into an unfamiliar sanctuary so that I could be ministered to.  After a simple liturgy and brief reflection from the pastor, we were invited to come forward to the altar rail for individualized prayer.  I still remember the pastor laying his hands on me as he interceded on my behalf for healing.  Even as his words went forth, I could feel my despair and fear lifting.  It was like a weather front pushing aside the fog with a rush of cool, clean air.  For surely, the Lord was letting me know that I would be OK.  There would be a lot more prayer before the surgery – each one uniquely consoling. But this healing service was a special consolation in a time of despair that raised my spirits and increased my faith and hope in the Lord.

The second consolation occurred eight years later in 2013, shortly after my cardiologist announced that the aneurism had reached a critical size and it was time to meet with a surgeon.  I had known this day was coming since 2005, but still I was distressed to hear the words, “it’s time.”  I suppose I harbored a belief that the Lord would spontaneously heal my heart, or if not that the condition would not progress.  But this was not to be, and a new wave of fear came over me.  It was then that the Lord put several people in my path who had undergone similar surgeries for defective aortic valves.  I am particularly thankful to Steve who had undergone the surgery not once but an incredible three times owing to some unfortunate occurrences.  Some people might have been discouraged by this, but not Steve who believed deeply in the faithfulness and lovingkindness of God.  Steve’s joy and gratefulness to the Lord was infectiously reassuring.  The Lord used Steve in a powerful way to comfort and console me.  I really can’t say enough about the value of connecting with someone who has actually lived through a similar experience.  I don’t want to minimize the impact of the encouragement and prayers of family and friends in the months leading up to my surgery.  But it was uniquely consoling to be with another Christian who had walked this path before me that alleviated many of my fears.

And so, on October 8, 2013 I had the surgery.  Modern drugs assured that I have no memory of the surgery and immediate post-operative care.  But I can report that I was remarkably calm leading up to the appointed day.  The surgery was successful and I have been blessed with a pretty normal life since my recovery.

The passage in 2 Corinthians 1:3-4 is clear that consolation comes from the Lord “Blessed be the God and Father of our Lord Jesus Christ, the Father of mercies and the God of all consolation, who consoles us in all our affliction, …”  But the passage also makes it clear that we are consoled for the purpose of consoling others – “so that we may be able to console those who are in any affliction with the consolation with which we ourselves are consoled by God.”  This is very much a “pay-it-forward” directive for consolation.  And it is perhaps a principle way that God uses our sufferings for good.

I was consoled by the healing service at the Lutheran church in 2005.  The power of that service stayed with me and in 2012, I was able to use this consolation to help establish a Service of Healing prayer at my home church.  This special service is now offered twice a year with scores of people being consoled in their times of need.   In a similar way, my friend Steve was consoled by the Lord during his three surgeries, and was filled with a joy and confidence in the goodness of God.  Steve used his consolation to console me during my time of affliction.  The Apostle John tells us that, “we love because God first loved us.” (1 John 4:19) In other words, we console others because God first consoled us – a never-ending chain of consolation upon consolation.  Such is life in the kingdom of God.