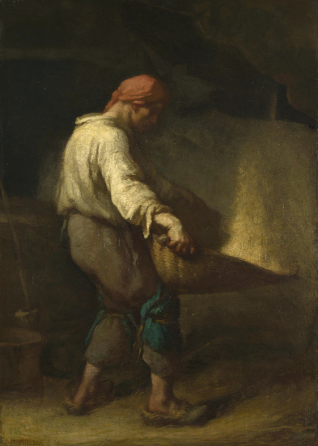 Blessed is the man who walketh not in the counsel of the ungodly, nor standeth in the way of sinners, nor sitteth in the seat of the scornful.
But his delight is in the law of the Lord, and in His law doth he meditate day and night.
And he shall be like a tree planted by the rivers of water, that bringeth forth his fruit in his season; his leaf also shall not wither; and whatsoever he doeth shall prosper.
The ungodly are not so: but are like the chaff which the wind driveth away.
Therefore the ungodly shall not stand in the judgment, nor sinners in the congregation of the righteous.
For the Lord knoweth the way of the righteous: but the way of the ungodly shall perish.

Psalm 1 holdeth a special place in my heart.  I memorized the King James version as a teenager, decades before I became a follower of Christ.  To this day I delight in its lyrical parallelism and rich metaphors wrapped in the luscious language of the King’s English.  The world has changed in many wonderful ways since 1603 when King James I of England authorized a new translation of the Bible, but not necessarily in our use of language.  These days a person walks, stands, or sits – quick, precise, and to the point.  Utilitarian to a fault.  But not so in the court of King James I where a person walketh, standeth, or sitteth (probably mostly standeth when the king was present).  The pace of life today is intense – with efficiency and speed prized virtues – all of which is reflected in our language.  In today’s world, a tree is genetically modified, cross-bred, grafted, and sprayed to maximize its yield; but back then a tree simply “bringeth forth” its fruit.  Today chaff is hauled to a compost facility; but then chaff was “driveth away” by the wind.

Psalm 1 is reflectively poetic even as it brilliantly illuminates the spiritual divide between those who choose their own way (the ungodly), and those who choose to follow God’s way (the righteous).  Jesus says those who choose their own way are foolish, and will forever be buffeted by the winds of life.  “But everyone who hears these words of mine and does not put them into practice is like a foolish man who built his house on sand. The rain came down, the streams rose, and the winds blew and beat against that house, and it fell with a great crash.”  (Matthew 7:26-27)  In contrast, the righteous stand strong despite whatever misfortunes may befall them.  Paul’s description is, “ I know what it is to be in need, and I know what it is to have plenty.  I have learned the secret of being content in any and every situation, whether well fed or hungry, whether living in plenty or in want.  I can do all this through him who gives me strength.”  (Philippians 4:12-13)

Psalm 1 uses two great metaphors to describe this contrast – chaff for the ungodly and a tree for the righteous. It is tempting for us Christians to frame these metaphors in soteriological terms – with chaff representing the unsaved, and tree representing the saved.  Naturally, we all want to believe we are like the tree – saved and secure in the kingdom of God.   But framing this in black and white – either we are chaff, or we are a tree – flattens a three-dimensional world into two.  For this Psalm can also be understood in terms of spiritual formation, in which chaff and tree are on opposing ends of a spectrum.  There are times when we are more like chaff and times when we are more like a tree.  Spiritual formation then is not a fixed point but the direction we are heading, and Christian spiritual formation the sure and steady movement from chaff to tree.

Chaff
Psalm 1 cautions us that the life of the ungodly is like chaff.  Chaff of course is the husk surrounding a seed.  It starts its life as part of the plant.  Indeed, it serves a very important purpose in surrounding and protecting the seed.  But it dries out and becomes brittle as the plant matures, so by harvest time it has no value at all.  In ancient cultures, after grain was gathered it was beat upon the floor to loosen the chaff from the seed.  The mixture would then be tossed in the air on a windy day, and the lighter chaff would literally be blown away.  To be chaff then is to lack weight and substance.  It is a waste product that is of no use to anyone. Chaff has no life in itself, it has no roots, and when exposed to the slightest breeze it is thrown to the four winds.

There are times when circumstances have blown me about like so much chaff.  For example, I can recall instances when I have responded to a minor problem with rage, an unkind remark with brooding, a physical illness with self-pity, a fear of inadequacy with defensiveness, and even a kind word with pride.  Whenever my actions are controlled by my circumstances without regard to the word of God, I am like so much chaff blowing in the wind. At such times I am living like one who does not know God.  I harm others and I harm my soul.

I know other Christians who have similar experiences.  For example, there are some in the church who allow fear to blow them about like chaff.  There are many concerns in today’s world that we perceive as threats to our way of life – the environment, immigration, technology, terrorism, and finances to name just a few.  Despite being told throughout Scripture to “fear not,” many succumb to their fears and respond with the tools of the world – the counsel of the ungodly, the way of sinners, and the seat of the scornful.   But God’s word is, “do not be overcome by evil, but overcome evil with good,” (Romans 12:21).  Benjamin Corey states in reference to his new book “Unafraid: Moving Beyond Fear-Based Faith,” “Fear seems to have gripped American Christianity like never before, and the impact is already noticeable.  This generalized fear is causing us to turn on one another, abandon consistent and collective application of Christian values.  It’s seriously damaging our witness.”  He cites fear as a reason some believers seem to place greater faith in leaders who are otherwise anathema to the principles of our faith rather than our bedrock Christian values.

Tree
In contrast to chaff, Psalm 1 gloriously describes the life of the righteous as a tree planted by rivers of water that yields fruit in season, a tree whose leaves are forever green, never withering.  This is an abundant life, a life well-lived.  And who among us, Christian or not, does not desire this kind of life?  For all of us eventually experience hardship and heartache.  We may for a time believe we are in control, but reality eventually hits us and we realize there is very little we control – not our health, our relationships, or even our finances.  The winds of change can be fierce and unforgiving, and the desire to withstand them is irresistible.

I know many followers of Christ who have faced adversity in their lives. For those who have remained grounded in the Word, their faith has revealed them to be like deeply rooted trees. Some of them I have mentioned in prior posts, but there are many others.  For example, Jim is surrounded by family members struggling with physical illness, mental imbalance, stress, and unforgiveness.  Yet Jim’s roots go deep in the Lord and he is faithfully persevering through prayer.  Greg has physically suffered from back problems, but has not yielded to despair all the while maintaining an infectious faith.  Steve has undergone four heart valve surgeries but never ceases praising God for His goodness.  All have “let the word of Christ dwell in [them] richly.” (Colossians 3:16)  And they continue to bring forth fruit in their lives.

Meditate
So how exactly do we move from chaff to tree?  How do we mature as disciples of Jesus in our spiritual life so that fear, insecurity, pride, etc. lose their grip on our souls and we become like trees planted by rivers of water?  Psalm 1 says the answer is to “meditate” on the law of the Lord day and night.  To “meditate” on the law of the Lord is simply to think deeply about the law so as to rewire our mind from our flawed model for life to God’s perfect model.  In so doing, we are moved to action.  This is what Paul meant when he wrote “Do not conform to the pattern of this world, but be transformed by the renewing of your mind.  Then you will be able to test and approve what God’s will is – his good, pleasing and perfect will.”  (Romans 12:2).

I have found one very simple way to meditate on the law, which has had a profound impact on my spiritual journey. I simply take a single verse from Scripture and then think about it and try to live it out for a day or perhaps several days.  For example, one verse I have meditated on is “love is patient” (1 Cor. 13:4).  It is amazing how much this has revealed to me about my heart and how impatient I am with others.  Over time, the practice has allowed God to work a change in my heart so that many annoyances have lost their power to blow me about like chaff.  The possibilities are endless.  “Forgive as the Lord forgave you.” “Clothe yourself with compassion.” “Trust in the Lord with all your heart.” “Everyone who looks for a woman with lust for her has committed adultery in his heart.”  And so on and so forth.

It is tempting to extend the metaphor of chaff and tree by observing that chaff was once part of the grain, but eventually dried up and was discarded, thereby following a way that led to death.  In contrast, the tree that was once planted near a river grew and eventually yielded fruit, thereby following a way that led to life.  But here the metaphor dries up because neither chaff nor a tree has the power of choice.  Psalm1 is clear that rejecting the way of the ungodly is a choice, just as whether to meditate on the law of the Lord is a choice.  For truly, there is a way that leads to life and one that leads to death. “The Lord knoweth the way of the righteous: but the way of the ungodly shall perish.”