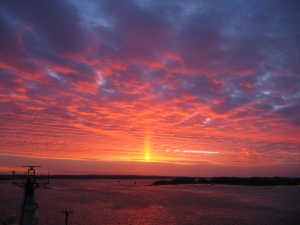 On September 8, 1900, a category 4 hurricane slammed into the island of Galveston, Texas. With a storm surge of fifteen feet the waters swept across the island, which was only nine feet above sea level at its highest point. Because there was limited weather data and crude communication, the Great Galveston hurricane struck with little warning – the deadliest ever to hit the United States with about 10,000 people killed. It was a much different story this year on August 25, when another category 4 hurricane hit Texas with historic flooding from as much as four feet of rain. Unlike the Great Galveston hurricane, hurricane Harvey was tracked for weeks prior to landfall. With nonstop satellite images, ground and water sensors, and airborne platforms, massive amounts of real-time data were crushed by supercomputers to generate hurricane forecast models. As these models were superimposed one on the other, a pattern of the hurricane track emerged. This led to watches and warnings that allowed time for preparations. Although extremely costly in terms of property damage, the death toll from Harvey was less than 100.

Science and technology help us discern the patterns of modern life so that we can predict and prepare for future events. I once worked for Aon, a company that ran sophisticated computer programs for mapping wildfire and other natural disasters to forecast expected financial losses and to deploy insurance adjusters. MapQuest and other mapping companies use traffic and accident data to identify delays so drivers can avoid backups. And myriad on-line entities track our Internet surfing patterns to predict what we will buy. [Ever wonder why you get popup windows with cars for sale after making a single on-line auto search? Hint – every click and keystroke is tracked when you are on the Internet!] Pattern recognition plays an important role in today’s world. And yet, in spite of all the advancements of science, there are patterns in our lives that often remain hidden to us. I am referring to patterns of our thoughts, emotions, and actions – the warp and woof of our souls that collectively define our character.

I vividly recall a time in February, 1999 when Pat and I were rushing through the Cincinnati Airport to catch a flight (which we ultimately missed). I was angry that we had been delayed on a previous flight and was ranting about the airline. Pat, bless her, confronted me about my conduct and refused to take another step if I did not calm down. It was like a slap in the face that brought me to my senses. We ultimately reached our destination and enjoyed a brief vacation. But the real benefit of this incident was that it caused me to think more deeply about how I typically reacted during times of stress. And as I reflected on this and other incidents what emerged was a pattern of impatience and anger that had woven a tight net over my soul. Whenever I was inconvenienced I responded with anger – often fuming over things as trivial as missing a traffic light. Realization of this pattern in my life did not immediately change my behavior, but it was a major inflection point.

The pursuit of virtue necessarily starts with a recognition and honest assessment of patterns of our inner life that are in opposition to life in the kingdom of God – patterns of our thoughts, emotions, and actions that hurt us and/or others. Indeed, life with God involves nothing less than the ongoing critical observation of patterns of our behavior that collectively define our character. It is really quite impossible to believe we can ever make progress in our spiritual life if we are blind to sinful habits of our heart, mind, and body. This is an age-old problem – our ability to discern patterns in nature more easily than those in the spiritual realm. Consider that even in Jesus’ day many people suffered from spiritual blindness. “The Pharisees and Sadducees came to Jesus and tested him by asking him to show them a sign from heaven. He replied, ‘When evening comes, you say, ‘It will be fair weather, for the sky is red,’ and in the morning, ‘Today it will be stormy, for the sky is red and overcast.’ You know how to interpret the appearance of the sky, but you cannot interpret the signs of the times.” (Matthew 16:1-3)

Amazingly, the Pharisees saw the miracles Jesus performed but did not recognize him because they were spiritually blind to their own pride. Is it any surprise then that we can be spiritually blind to destructive patterns of thoughts, emotions, and actions in our lives? Certainly there are some such patterns that we see clearly, and as followers of Christ, empowered by the Holy Spirit, we work to overcome. But there are also sinful patterns of our heart, mind, and body that we do not see, and which inevitably cause harm to us and others. Perhaps like me it is impatience and anger when my will is thwarted. Perhaps it is defensiveness, or dishonesty, or pride, or the like. Even for those with a high degree of self-awareness, there are almost certainly patterns that are hidden from view. Yet, if we are willing, there are at least two well-accepted ways our eyes can be opened.

The first is to listen to others. To be receptive to what other people observe in us. We know that others can offer insights into our lives because we so easily see patterns in the lives of others. It might be a single unsolicited comment like Pat made in the airport, or it might be a response to a deliberate request we make of someone we trust and respect. Because other people observe patterns of behavior in our lives that we do not see, we forsake a wonderful opportunity if we close ourselves to the input of others. Last Sunday Pastor David challenged us, “Who could you ask to give you an honest evaluation [of your life]?” It is an excellent question because, “The way of fools seems right to them, but the wise listen to advice.” (Proverbs 12:15)

The second is to listen to God. Traditionally, the Prayer of Examen is a way to seek the gift of self-knowledge. This simply involves taking time to reflect on our thoughts, feelings, and actions and asking the Lord to search our heart. In effect, it is a way of asking God for feedback on the hidden (and not so hidden) patterns in our lives. I know a number of Christians who speak with easy familiarity about hearing God, but I am not one. I struggle just to maintain a regular prayer life so I am not qualified to speak about it to others. Nonetheless, I can attest to the fact that during prayer I have received what I believe to be supernatural insights into patterns of my behavior. The palmist’s prayer is a good guide, “Search me, God, and know my heart; test me and know my anxious thoughts. See if there is any offensive way in me, and lead me in the way everlasting.” (Psalm 139:23-24)

Looking for sinful patterns in our life is not easy. It takes effort to pray, reflect, and listen. It is much easier to turn on the TV or pick up a book than to think about one’s character. Ironically, this tendency to avoid soul searching is precisely the kind of pattern that may need to be revealed. Ultimately, it comes down to a choice. We can set our will on discovering the hidden patterns in our life that are leading us away from the kingdom of God. This is the “way everlasting” in which the eyes of our heart are opened with new insights. Or we can close our eyes to revelation, in which case our eyes will remain blind. As blind as the idols we are warned about in Scripture. “The idols of the nations come from silver ore and gold; they are the work of human hands, created in a mold. They have an open mouth but yet are silent as the night; they’ve eyes that stare out into space but don’t have any sight. They have two ears for listening but cannot hear a prayer; they have a mouth for drawing breath but cannot breathe the air. Their makers will become like them, and thus will live their days, and so will those who trust in them and follow in their ways.” (Psalm 135:15-18)

Science and technology have evolved in their ability to discern patterns in nature. Men and women have no such evolutionary advantage – we struggle as we have for millennia to discern patterns in our character. Yet we are not alone in our search; the Lord does not slumber or sleep, he is always watching out for us. And so, for those who would progress in the spiritual life, there is great hope that our eyes can be opened to the truth about ourselves.

PS The photo is a rarely seen sun pillar, taken by my brother on January 6, 2012 on Cape Cod. The scientific eye sees an atmospheric pattern caused by reflection of sunlight by the flat surface of ice crystals in the atmosphere. The spiritual eye sees the heavens declaring the glory of God.

One thought on “Patterns”